Inside Story of the Inside Passage

The Inside Story of the Inside Passage 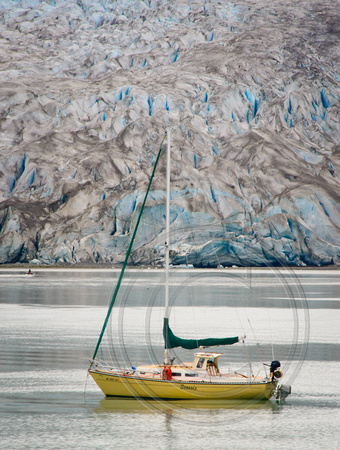 In April of 2011 I went sailing for the first time. It was a 3 week trip covering 300 miles from the Everglades to Key West and back.  I fell in love with sailing from the first hour.  Five months later I found Genesis in Friday Harbor.  Something about the boat just resonated with me.  Even the name suggested a great new beginning for me.   May 6 of this year I left on a trip that would turn out to be much more than a cruise.  It was an epic life experience that struck to the very depths of my soul.  When someone says “how was your trip?”  I just say, “Awesome!”   The truth is so much more complicated.  In this article I’ll try and explain just five experiences that made the trip so meaningful.

One : A far greater sense of self confidence.  I had planned on having crew for the whole trip.  But at the last minute my crew bailed.  I had never singlehanded for more than a day sail.  I had never even considered doing the trip solo.  I almost canceled.  But for reasons I didn’t understand at the time, I suddenly decided to just go and see how far I’d get.  I threw out all itineraries and plans.  I was just going sailing day by day.

Each plan was  built on the previous days success.  The days began to pile up and the miles flowed under the keel, I checked off one “first” after another.  I began to believe that I was capable of doing more and going farther.   I rode out a gale in an anchorage in Prince Rupert then timed a weather window for a perfect crossing of Dixon Entrance to Ketchikan and for the first time I could say with confidence, “I was going to Juneau!”

Two: I learned that there is an intelligence greater than my own.  You know how many people say their best ideas come first thing in the morning, or last thing at night or sitting on the toilet?  Well those are all quiet times.  Times when you let the world go and your mind is still.  Sailing alone I lived in that state and consequently I was open to “ideas” all the time.  Where does inspiration come from?  I don’t know. God, universal conciseness, or whatever.  I know it can’t be simply my brain. 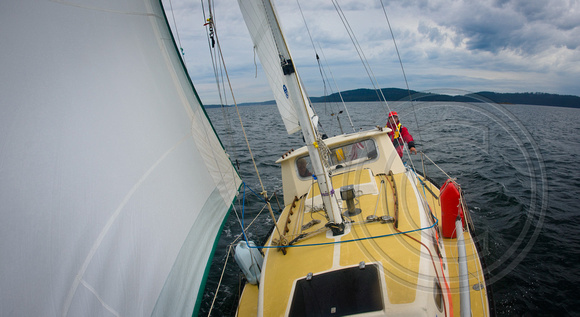 Many times I was nervous about one thing or another.  So I dealt with it by breathing, being grateful, appreciating beauty, and loving everything.  Hymns from a church I had not gone to for years would pop into my head and without noticing I’d be humming some song over and over.  Suddenly I’d realize what I was doing and when I’d listen to the words consciously they would be pertinent and profound.  Here are a few snippets, “It matters not what be thy lot for Love doth guide,” “From sense to Soul my pathway lies before me from mist and shadow into Truths clear day”  “And o’er earth’s troubled, angry sea, I see Christ walk,  and come to me, and tenderly, Divinely talk.” there were many more but the point is I felt I was given inspiration and guidance as I needed it.  I didn’t worry or stress.

Please don’t misunderstand, I also did not just blithely sail along with no regard to the tools of seamanship.  I used my charts, books computers, internet when possible, radio weather reports, and other sailors.  However I also came to find that all these tools are mistaken at times.   At times every one of these resources was wrong. Obviously the weather was up for debate, the chart had misplaced rocks and unmarked shoals, other boaters opinions at times were good at times not so good and often lacked detail, and the guide book had mistakes as well.  And lets be honest sometimes I just misread or misheard or forgot something. So I used the tools but then allowed my heart to be open to direction.

As the trip turned days into weeks, I had many experiences when I suddenly “felt” that I should take action, such as, reef now, or sail now, or anchor right here.  There are so many little moments like this that I can’t discount that I was being guided by an intelligence greater than my own.  I’m not that good.   I didn’t acknowledge what was happening fully until the day I arrived in Ketchikan and talked to another cruiser who had come across Dixon 4 days earlier.  They crossed based on a good weather report.  I was planning to cross on that same day.  But when I got up to go, I just didn’t feel it was right.  I stayed despite others leaving and the favorable forecast, even though I knew it might be my only chance for at least 4 days.  It turns out the forecast was all wrong and they had the worst crossing in 14 years of cruising.  The beating they took even broke their radar.  I enjoyed a nice day being very productive fixing some issues on Genesis and then sitting out the next storm in Pillsbury cove.  Sitting by my little diesel furnace I read during the worst of the storm. During lulls I visited with other cruisers, and beach-combed for petroglyphs.  It was all very pleasant and when I did leave I had perfect conditions and a fast crossing.

Three: People are so nice. If you put out love you get love.  The law of reciprocity, or whatever you want to call it is true.  You can bring good things and experiences into your life if you expect it.  I met nothing but kind and generous folks both on the water and in towns along the whole trip.  From invites aboard yachts for potlucks, to locals offering rides, to shop owners helping with repairs, to fisherman offering fish, everyone had a smile and an open heart.  At first it felt like I could not give back enough.  I received so much, but soon it was clear that kindness could never cost them or me. 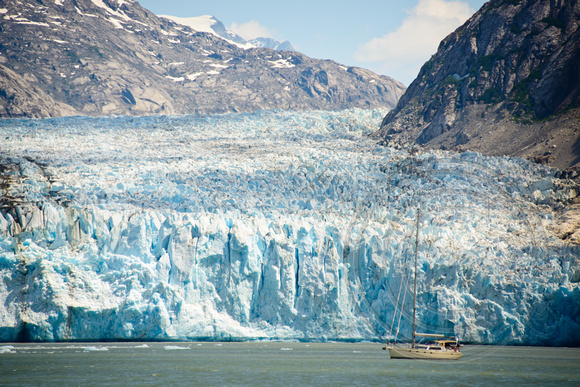 Four: This brings me to the fourth big revelation and that is the power of gratitude.  This one is still something that I’m trying to grasp but I do know that a big part of receiving good is being grateful for what you have.  So when a cruiser would offer me a dinner or something far greater than I could repay, I would make a point of clearing my mind of the temptation for guilt, or for even declining a kind offer because it was “too much to ask”.  They offered willingly and with love and I believe that such an act can never deplete them.  As it turns out I was able to repay in very large ways many of these kind acts.  I was able to photograph their boats in dramatic scenes, against glaciers, or nosing up to a giant waterfall, or sitting at anchor with perfect reflections and sailing under spinnaker.  I was able to pay it forward by diving a boat who’s prop was tangled in a crab trap.  I buddy boated with another cruiser, going first down a very narrow and shallow twisting rock and kelp choked passage called Rocky Pass.  I also ended up crewing for one skipper to help him sail home from Puget Sound to San Francisco.

Five:  If you need it you’ll have it.  However if you worry about it and stress over the possible loss of something or lack of something then you will likely experience that very lack.  An example... I had decided that I needed to change the oil in my gear case on my 9.9 hp engine.  This is my boats one and only motor by the way.  In Ketchikan my crew and I went straight to the outboard shop.  I was going to buy oil and figure out a way to remove the engine from the boat, including disconnecting all the controls, lift it off the mount, find a new place to mount it vertical and change the gear oil.  I had never done it before, didn’t know how to do it, and am not very mechanical.  But I felt it needed to be done.  The guy that serviced the engine before I left told me not to worry about it until I got back.  However I felt without a doubt I needed to change the oil right then.

The whole story is a bit involved but the punch line is that I have no mechanical knowledge but was given the right person with the right info exactly at the right time to get the job done.  In addition my gear cable that had been cracking broke as we finished the job and the shop we were at had one of the exact cables we needed to replace it.

These are just a few of the many “revelations” I experienced on the passage.  I was successful in sailing to Juneau solo and then on to Glacier Bay and home with the help of crew.  Sailing south as skipper was a fun contrast to being solo.  The new dynamic of three guys on a 27 foot boat created opportunity for a whole new set of “Revelations”.

The trip totaled 2879 nm in 110 days.  Farthest point North and West was Grand Pacific Glacier at Lat 59 N and 136 W.  I sailed about 900 of the 1450 miles north and about 700 of the 1400 miles south.  I’m a professional photographer and have assembled a nice slide show of the trip.  I’ll be available to do presentations in the near future.  Contact me if you have a group that would be interested in seeing and hearing about sailing BC and SE Alaska. 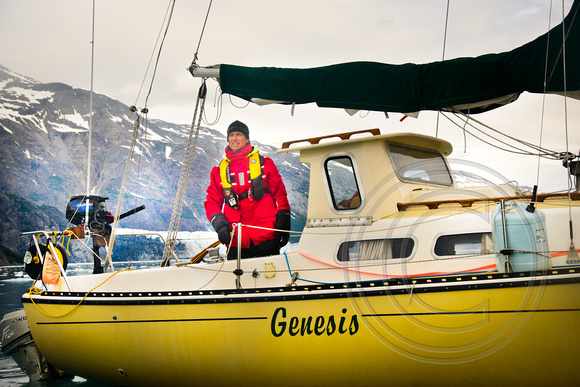 搵 intern(non-registered)
Good day very nice blog!! Guy .. Excellent .. Amazing .. I’ll bookmark your web site and take the feeds additionally?I’m glad to search out a lot of helpful info right here within the post, we’d like work out more strategies in this regard, thank you for sharing. . . . . .
먹튀검증(non-registered)
Twitter had a tweet on bulk t-shirts, and lead me here. There are a variety of ways you can go if you want to make custom T-shirts. There’s digital printers, plot cutters, and even custom transfers, but screen printing is the best way to produce a lot of T-shirts at a very low cost per unit.
outdoor living(non-registered)
There are some intriguing points soon enough on this page but I do not determine if these people center to heart. You can find some validity but I’ll take hold opinion until I explore it further. Good article , thanks and we want more! Included with FeedBurner as well
Buy delta 9 THC distillate online(non-registered)
THC in its full meaning “tetrahydrocannabinol” is a chemical component found in cannabis (marijuana). It is the main psychoactive component present in cannabis. This means that, it is that ingredient in cannabis that causes or initiates the high, which influences the mind and behavior. THC can be found in various cannabis products e.g. cannabis extractions informally called “dabs”, honey oil, wax etc. Delta 9 THC Distillate is the highest quality of THC Distillate you will find out there! They are good at making Vape Oils, Edibles, Tinctures, Topicals and many other applications.
https://www.rooferalbanyny.com(non-registered)
"Excellent and decent post. I found this much information, as to what I was exactly searching for. Thanks for such post and please keep on sharing with us.
No comments posted.
Loading...
Subscribe
RSS
Recent Posts
Magical Encounter with Transient Orca Encore Sail to San Francisco Inside Story of the Inside Passage One Year of Racing Cultural Acceptance of Addiction Overcoming discouragement Getting the word out.
Keywords
T36 T46 T99
Archive
January February March April May June July August September October November December
© Alan Niles
Powered by ZENFOLIO User Agreement
Cancel
Continue