I set sail from Olympia, the southernmost tip of the Inside Passage to Alaska. Along the way, I would occasionally run across another cruiser who had begun their journey much farther south.  Portland, San Francisco and San Diego were the most common ports of departure.  I use the word common lightly, as the total of these meetings was fewer than 10.  Each time I found it hard to imagine making the ocean passage, in order to get to the protected waters that I was now challenged with.  Indeed, these inside waters have their own set of unique challenges, but the ocean, with its wide open space and seemingly infinite power, is a thing of awe and wonder like no other.  Perhaps one day I’d have the gumption to go out there and try it myself, I thought. 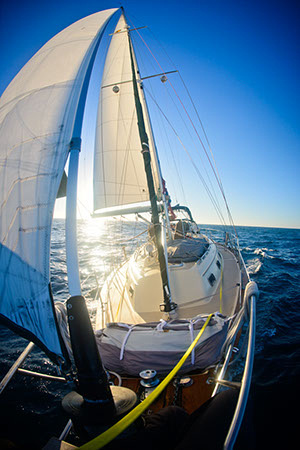 My chance came sooner than I had imagined.  While having dinner aboard another boat in Glacier Bay, the skipper mentioned that his wife was getting off the boat in Poulsbo, Washington, and he would need crew to get back to San Francisco.  Without hesitation I threw up my hand and said, “I’ll go!”  I instantly regretted my hastiness.  What was I saying?  They call that stretch of water “the grave yard of the Pacific”.  I’d read many a tale that says it is the worst patch of ocean. Many global circumnavigators swear that the Pacific coast is the most challenging portio

n of a trip around the world.  Most of the harbors are blocked by bars, shallow areas that cause strong tide rips and large waves as the energy from the ocean is suddenly concentrated from 10,000 foot depths down to 300 feet.  The Columbia River bar is one of the most notorious of all.  The Coast Guard trains there with their specially designed, powerful self-righting cutters.  Ships designed to be rolled.  Sailboats are self-righting too, but the consequences tend to be more severe.

The reality is, though, if I want to ever go anywhere, I’m going to have to sail that stretch of water, so I might as well get used to it.  Seven weeks after that fateful dinner in Glacier Bay, I arrived back in Olympia.  Two weeks after that, I met up with Lou and Patrice on their boat, Sonamara.  Lou had found another volunteer along the way, so we had a total of three aboard for the passage south.

My crew mate Vincent had also sailed the passage earlier in the year.  He did it mostly solo in his 30 foot Cat rigged Nonsuch 30. He had other offshore experience including sailing overnight solo from Haida Gwaii. Lou's boat, Sonamara, is a 45 foot cutter rigged Island Packet.  The skipper had sailed her up himself, as well as having sailed halfway around the world in a Westsail 32 at one time.  I felt good that we had a good crew and a good ship.

We left early on the morning of Sept 14.  The wind was light and the current against us.  We motored through the gathering clouds and light drizzle.  The iron genny moved us along at 6.5 knots all day.  At Point Wilson we found thick fog and calm seas.  The veil over the tranquil straits belied the dangers of the active shipping lanes.  Our AIS and radar showed blips moving at 18 knots from a variety of directions.  We would only hear their fog horns as 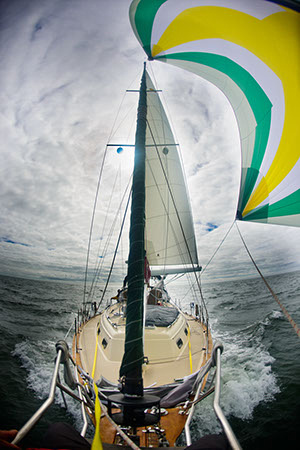 they came within a couple miles.   During the night, ghostly apparitions would pass by within a quarter mile.  A cruise ship was lit up like a city on the water, a glowing cloud of vapor as she steamed past.

My night watch was from 1 to 4 am.  When I took over we were 20 miles from Cape Flattery and the entrance to the Pacific.  I punched a twenty degree turn into the auto pilot to set our course across the traffic lanes and out to sea.  This was my first experience using radar.  I played with the buttons, trying to get used to selecting targets and determining closing distances and speeds and times.  There were plenty of them, so I had lots of practice.  About two hours into my watch the fog lifted just enough that I could see an amber light ahead.  I checked the radar and saw nothing that matched.  The light seemed to be low on the water.  There was still fog just a little above water level.  I was very disoriented.  It was impossible to tell how far away the light was or what it was attached to.  The fog was lit up in a bright amber glow and below it a dark line of pure blackness.  I turned the boat and throttled back to an idle.  This woke Lou who came charging to the cockpit to see what was wrong.  He instantly recognized the amber light as the big lights of a fish boat in the distance.  Just about then, the one light that had seemed so close began to resolve into 3 lights.  I could see it was a couple miles off at least.  More of these boats showed up as we came closer to the Cape.  Not knowing what kind of nets they may have had out, I gave them a wide berth.

The next day was supposed to be rather stormy near shore so we headed farther out to sea for the rest of the night and the following morning.  I took another watch around 10am and was soon greeted by a pod of orca cruising past.  We were motor sailing with full sail into darkening clouds.  I could see the cells building in patches around the boat.  Before long I started to see lighting strikes.  We secured electronics in the oven and the microwave.  We steered away from each cell as it built in front of us or threatened to veer into our path.  At one point, lighting struck right in front of the boat.  I felt like we were a running-back, ducking and dodging through a line of tacklers, looking for a hole to the end zone. We turned 90 degrees to port.  It really didn’t matter if we were headed in the right direction for San Francisco, as long as we were headed away from the lightning. 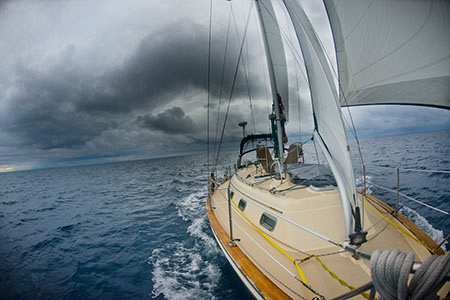 Soon,  a pod of dolphins joined us and surfed along side the boat.  It felt as if they were saying, “this way guys, follow us”.  We sailed past another large group of dolphins jumping and frolicking and appearing to be in a f

eeding frenzy.    Shortly after, the lightning abated and we were able to resume a proper course.

The next couple days were a blur.  We motored mostly. We tried to sail, but light SW wind and confused seas made it difficult.  The night of the 18th the wind finally decided to cooperate and I pulled out the Genoa during my night watch.  This was the beginning of a lot of good sailing.  From then on we sailed with a variety of configurations.  We did some wing on wing with the staysail, we reached fast with full sail.  We flew the spinnaker during some light air, keeping the boat going at over 5 knots.

Rounding Cape Mendocino, we consistently had 7 foot sea and winds over 25 knots.  We had top speeds of 8.9 knots and averaged over 7.2.  We were racing a storm front that was supposed to be bringing a cold weather and SW winds and rain.  If all went well, though, we would be able to get to the Golden gate about 6 hours before the storm hit.  That was a pretty tight window.

During the night of the twentieth, the full moon lit up the sea. I took my watch at 1am where I soon found that I was surrounded by dolphins.  I counted at least 20.  They spent the next two hours surfing along with the boat.  Some rode the bow wave, others just swam alongside the boat.  Now and then, I’d see one dart away, probably chasing a fish spooked up by the boat. It was a magical experience, alone with these graceful animals in the moonlight, surrounded by the wind and the sea.

As it worked out, the wind began to shift as we made our way toward the Farallones.  This shift gave us fog and lighter wind.  It also apparently gave lighter winds on the race course of the America's cup as Team New Zealand was about to defeat Oracle but the race timed out, leading to a history making comeback that we got to witness in the coming week. 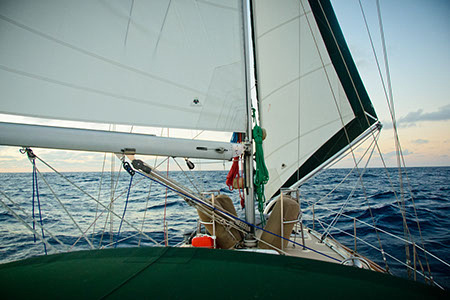 As we entered the shipping lanes toward the Golden Gate, the fog lifted and the wind built back up.  We had 18 knots on a broad reach.  I looked at Lou and then at the spinnaker and said we could fly it.  I’m not sure if he agreed or just didn’t disagree, but that was enough.  I was on the foredeck getting it set up.

We were missing slack and it was a big tide on a full moon.  We were facing a 4.5 knot current at the Gate.  We needed all the power we could get to push Sonamara’s 25k pound displacement against that stream.  Lou’s big, custom designed, asymmetric flew powerfully in the freshening breeze.  The boat moved at over 7 knots through the water.  Lou did a great job hand steering to keep the sail full in the shifty winds under the gate.  The big ebb tossed up a little sea against the wind.  It was a dramatic and memorable

entry into San Francisco bay.  A line-up of tankers piled in behind us. They had probably been waiting off shore, as the bay had been restricted for transit during the America's cup racing.

We jibed in front of a big tanker as we made our turn for Sausalito.  We found a spot at a marina and tied up.  A few hours later the wind came roaring into the bay.  The rain came in buckets and it snowed in the mountains.  The America's cup race was canceled the next day.  We had just made it before the storm. 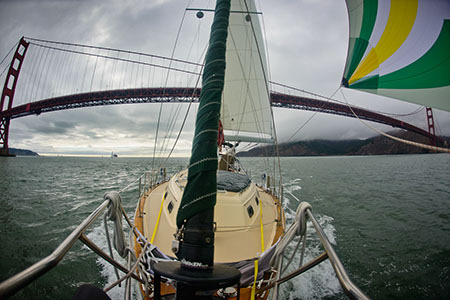 The following days were spent sightseeing, and watching the AC 72’s scream across the bay with Oracle winning race after race.  We had a great sail of our own to Sonamara’s home port in the South bay.  Of course we gave the ship a good, well-deserved scrubbing after a long and successful voyage that Lou had begun back in April.

We traveled just under 1000 nautical miles and averaged 6.8 knots.  The trip took 7 days and 6 nights non-stop.  I feel very fortunate to have had a calm passage and sturdy boat with a good skipper and good crew.  We were blessed with dolphins, porpoise, whales, tuna, flying fish, and sunfish, along with full moon rises at sunset.  We had good wind, sun, and following seas, pretty much everything a sailor could ask for.  It was a perfect conclusion to an amazing summer of cruising the west coast.

Kofa123(non-registered)
Kofa was established to re-engineer how people access energy. We are on a mission to create an affordable, sustainable and customer driven electricity network.
tmt manufacturer(non-registered)
Vessel NORWEGIAN ENCORE (IMO: 9751511, MMSI: 311000879) is a Passenger (Cruise) Ship built in 2019 and currently sailing under the flag of Bahamas
home security system(non-registered)
Find Norwegian Encore sailing dates and sailing calendars and rates on iCruise.com. Book Norwegian Encore sailings online or call 1-800-427-8473.
안전한 온라인카지노(non-registered)
I like this web site very much, Its a really nice billet to read and obtain info .
Situs Slot Online(non-registered)
I saw a lot of website but I conceive this one has something extra in it.
No comments posted.
Loading...
Subscribe
RSS
Recent Posts
Magical Encounter with Transient Orca Encore Sail to San Francisco Inside Story of the Inside Passage One Year of Racing Cultural Acceptance of Addiction Overcoming discouragement Getting the word out.
Keywords
T36 T46 T99
Archive
January February March April May June July August September October November December
© Alan Niles
Powered by ZENFOLIO User Agreement
Cancel
Continue